Nine protesters wearing shark costumes held posters and slogans at Cathay’s check-in area and later staged a sit-in to get their message across about what the airline calls its “sustainable” shark fin policy.

The 45-minute protest led to a stand-off with airport and security staff and police.

The airline has not imposed an outright ban but instead set up a panel of experts to decide on a case-by-case basis whether each shipment is from a sustainable source. Campaigners argue that it is often impossible to verify whether cargoes are sustainable or not.

Cathay said the negativity was unwarranted as it was one of the first airlines in the world to raise awareness of the unsustainability of the global shark fin trade back in 2012.

A spokeswoman said: “When we first implemented this procedure, it was believed and advised that an outright ban would force the trade to go underground. So a policy of enforcing ‘sustainable’ sourcing was viewed as the most responsible position.

“Cathay Pacific Cargo will continue to assess this with a team of external sustainability experts.”

An online petition last week for the airline to stop carrying shark fin attracted around 1,200 signatures.

Vegan activist Jess Henderson, who was behind the e-signature campaign, said: “We got the idea after HK Express decided to go fin-free … so it’s perfect timing to put some pressure on Cathay and get them to relook at their policy.

According to government data, shark fin imports to Hong Kong dropped by 42 per cent between 2010 and 2015 to 5,717 tonnes. During this period there was also a 72 per cent drop in imports by air to 450 tonnes.

Among the many people who stopped to take pictures at the airport, Lorainne Limchesing said she was not aware of the airline’s policy.

“Well Cathay Pacific is a really business-making airline but they should heed their social responsibilities as well. They should follow suit if they care enough,” she said.

Ian Stuart, travelling with the airline to Perth, said: “I wasn’t aware of it so that didn’t come into my reckoning on my decision on who to fly with, and they are a safe airline. But it does change my perception.”

Categories: News, Sharks in the NewsBy HKSharkFoundation30 May, 2016 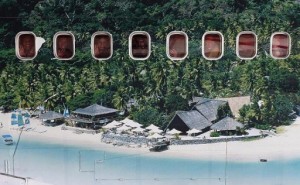