In the run up to Chinese New Year,
restaurant polls challenge our sense that shark fin consumption is going down

Data collected by independent researchers and released by Hong Kong Shark Foundation today, show that although many hotels have taken shark fin off their menus, most Chinese restaurants in Hong Kong still offer shark fin soup.

Key findings are that of 375 restaurants polled in Hong Kong in recent weeks, over 98% continue to offer shark fin on set menus. Of 2470 menus reviewed across those restaurants, over 85% were found to include shark fin, despite a strong public sentiment against the consumption of endangered species[1].

This is in contrast to recent trade data showing a 30% percent drop in shark fin imports from 2012-2014. At the same time, research has shown that following campaigns by green groups targeting the consumption of shark fin at wedding banquets and a recommendation from the Hong Kong government that public officials not serve or consume the dish at official events, over 60 percent of 4 and 5 star hotels have taken shark fin off their menus or serve it only upon request.

Shark fin is frequently a product of illegal, unregulated and unreported fishing, and is procured in an unsustainable and often cruel way. Shark populations continue to decline globally, while according to leading scientists[2] the lucrative trade in fins (not only from sharks, but also of shark-like rays such as wedgefishes and sawfishes) remains largely unregulated across the countries and territories that exported fins to Hong Kong (a major fin trade hub).  In 2014 this amounted to 68 countries exporting  5,700 tonnes of shark fin to Hong Kong.

According to the scientists’ research, one in four species of sharks and rays are threatened with extinction, just 37% are considered to be safe, which as they report is the lowest fraction of ‘safe species’ among all vertebrate groups studied to date. Furthermore research has shown that 40% of  Hong Kong’s Shark Fin market is made up of 14 shark species which are threatened according to the IUCN Red List. Thus the likelihood of dining on threatened species is high.

Despite this, many restaurant operators across Hong Kong still insist on offering unsustainable shark fin dishes to their patrons.

‘The findings of the survey are concerning and much worse than we anticipated’ said Joan Chan, Campaign Director for Hong Kong Shark Foundation. ‘The wide offering of shark fin is not consistent with recent research that showed consumers are moving away from its consumption. We believe that the public may not be ‘walking the talk” and passively consuming shark fin, since it is on nearly all Chinese new year set menus.  Importantly, we call on the Hong Kong public to help conserve these important marine species and send a strong signal to the retailers of shark fin, by demanding shark fin-free menus and by not consuming shark fin soup over the extended Chinese New year period, and beyond’, she says.

In light of the continued decline in shark populations and Hong Kong’s dominant role in the fin trade, the Hong Kong Shark Foundation urges the HKSAR Government Environment Bureau to take strong legislative action by banning the sale of cruel and unsustainable shark fin – just as it has recently committed to doing for the elephant ivory trade.

For the survey full report: http://hksharkfoundation.org/sharkfoundationwp-content/uploads/2016/01/Lunar-New-year-shark-fin-survey-2016.pdf 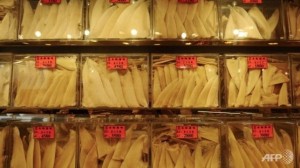 Standard Chartered HK Marathon 2015 (8 Sep 2015)
How would you describe your marathon journey in one word? Kirsten Fu, Full Marathon runner in shark costume, a member…
Go to Top