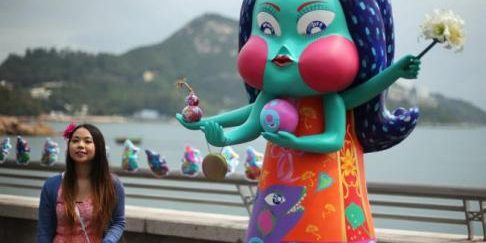 Mythical sea creatures like the three-metre-tall Net Man – made of old fishing nets from Aberdeen – have invaded the Stanley promenade. But there’s no need to run – they are part of an “art walk” taking place alongside an annual film festival celebrating all things oceanic.

The Hong Kong-San Francisco International Ocean Film Festival returns for a second year today with a diverse selection of more than 30 films at cinemas and outdoor venues such as Shek O beach.

The San Francisco leg of the event started in California a decade ago to raise awareness of marine conservation and came to Hong Kong for the first time last year.

The addition of the ocean art walk in Stanley features works from local and international artists who have used found objects such as plastic bottles, old fishing nets and wooden pallets.

“Often people come to Stanley for shopping or eating but this is a great way for people to learn something, be inspired – and it draws more awareness to the ocean,” said Doug Woodring, founder of non-profit environmental charity Ocean Recovery Alliance, which organised the festival with support from the Southern District Council and Stanley Plaza.

Woodring said the week-long film festival covered a range of topics such as sharks, turtles, surfing and fishing.

One of the most striking works on the art walk is Net Man, made by American artists Judith and Richard Lang, a husband-and-wife team who used old fishing nets from Aberdeen and rope from the Hong Kong Sea School in Stanley to create the green giant.

The work represents a make-believe character which has risen from the oceans to thank the city for the local trawling ban that started in January because it gives sea creatures a chance to regenerate.

The couple has spent 14 years collecting plastic rubbish from Kehoe Beach in California and making sculptures and images from the debris, which can range from bottle tops to shotgun wads.

“We have thousands of pounds of plastic in storage,” Richard Lang said.

“A few years ago, we started seeing bottles from the 2008 Beijing Olympics turn up.”

Local artist Kiwi Liu has created a fictional goddess of sharks, while Kacey Wong made a disfigured shark sculpture from wood he recovered from industrial pallets. The film festival runs until next Wednesday and the art walk finishes on April 24.

This article first appeared in the South China Morning Post print edition on Apr 10, 2013 as Ocean film festival conjures up goddess of sharks 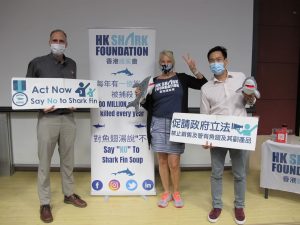 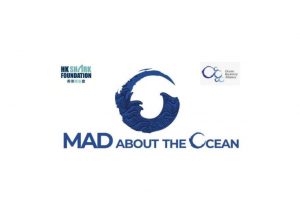