IMMEDIATE RELEASE [Hong Kong, September 9 2011] When a Hong Kong citizen, Rachel Pang, saw the cooking programme on TVB Jade last Sunday, 4th September 2011, she was shocked to see the chef cooking with shark fin – an ingredient that has been courting controversy worldwide due to its poor environmental credentials.

Outraged, Ms Pang immediately wrote to TVB Jade, explaining that tens of millions of sharks are killed for their fins each year and that many shark species are already threatened with extinction. She then mobilized several environmental NGOs in Hong Kong to write to the company to express their deep disappointment at its decision to air such a programme, and to request that such programmes were prevented from showing in future, in the interests of sustaining TVB’s standing as a corporate citizen. All complainants received a standard auto-response but no direct comment on the issue.

WWF-Hong Kong stated that they had written to TVB Jade the previous year but clearly to no effect. Today, according to its programming schedule, TVB Jade is still planning to show another cooking programme featuring shark fin on Sunday 11th September.

Bertha Lo, of Hong Kong Shark Foundation, added: “Instead of threatening our marine ecosystems by promoting the consumption of shark fin, Hong Kong’s chefs have a real opportunity to showcase their creativity by developing some genuinely exciting alternatives to shark fin. This would make a much more interesting programme for TVB Jade’s viewers!

It is estimated that as many as 73 million sharks are killed each year to satisfy the global demand for shark fin and related products, with Hong Kong, Mainland China and Taiwan the main consumer markets. Consequently, many shark species are now threatened with extinction: in April 2010, the IUCN Red List classified one third of shark species – for which there were data available for assessment – as at high risk of extinction.

Hong Kong is the global center of this trade, handling approximately 50% of worldwide shark fin imports each year.

However, the tide of public support for shark fin is already turning… Earlier this year, marine conservation charity BLOOM released the results of Hong Kong’s most comprehensive study into cultural attitudes to shark fin consumption. Stan Shea of BLOOM Hong Kong explained: “Of a statistically significant 1,029 respondents in our study, 78% would accept a wedding banquet menu without shark fin. It is time for catering and banqueting industry to sit up and listen to what the public are saying.”

Furthermore, in April and August of this year, more than 14,000 visitors to Ocean Park’s Grand Aquarium signed a pledge not to consume shark fin soup in the 38 days that it was conducted by Ocean Park Conservation Foundation. Almost 1, 000 Hong Kong children gathered in Cyberport, as part of the 1,000 Kids campaign to make a public pledge not to eat shark fin in July. Evidently, there is considerable public backing for shark-free menus.

To conclude, TVB’s decision to keep promoting shark’s fin in its programme is against the will of the general public.  It is a decision in defiance of its corporate social responsibility and has no doubt caused negative impact to its corporate image.

Hong Kong environmental NGOs working to protect sharks from extinction are dismayed by this ill-considered decision, and call upon TVB Jade to cut the footage about cooking shark’s fin from the scheduled showing of “Food Commander 2” and to pledge not to feature shark fin in its cookery programmes in the future. 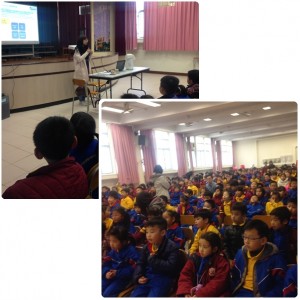 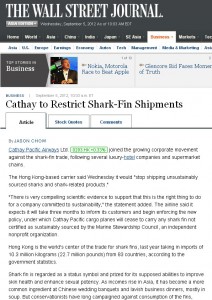