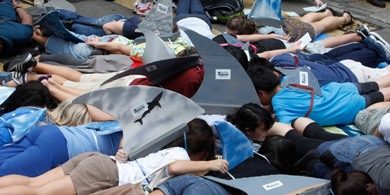 The world first shark-saving ‘Plankmob’ was brought by HKSF on Sunday, 25 September 2011. The “Plankmob” picks up on the new worldwide craze of “planking” — where individuals lie face down in an unusual position or location and post the photo on the internet.  With a rallying cry of “Shark-finning is a Crime against the Environment”, we attracted participants of all ages to plank simultaneously amongst the weekend crowds of Mong Kok, lying like the victims of a crime scene but with fins strapped to their backs.

Participants met at a given place and time, publicized on Facebook. Everyone was asked to wear a blue or grey top/shirt and is invited to design and make their own shark fins through recycling other items. Prizes were given to the best ‘plankers’ and photos of the different planks were displayed on our facebook page . Prize sponsors were EC® Eternal Concepts, photographers Alex Hofford and Paul Hilton.

With California being the most recent U.S. State to implement legislation against shark fin, HKSF suggests now is the time for the Hong Kong Government to step up to the plate.