Excuse me waiter, there’s a shark in my soup

Some 200m years before dinosaurs made their appearance on earth and thus quite some time before Homo sapiens began celebrating nuptials at extravagant wedding banquets, sharks swam the oceans. Sharks are older than trees. They have survived at least four planetary mass extinctions.

The link between these ancient predators and contemporary wedding receptions is that, among Chinese people, it is a sign of generosity and prestige to serve guests shark-fin soup. Since there are more than 1.3bn Chinese people, and since they are getting more affluent by the day, that is of no little consequence to the shark population. Some 70m sharks are killed each year for their fins. Much of the time, the fins are sliced off with a blade at sea and the bloody shark torso thrown back in the water to die.

The California state legislature is debating a bill co-sponsored by Paul Fong, a Chinese-American Democrat, to ban the sale, consumption and trade of shark fin. Hawaii, Oregon and Washington state already impose similar bans. California accounts for 85 per cent of shark fin eaten in the US. The bill sailed through the lower house assembly, but is being held up in the state senate because of concerns it discriminates against Chinese Americans.

What people eat is, indeed, a sensitive topic and one that generates much hypocrisy. Different cultures have formed their own taboos about what is proper, and not proper, to eat. Muslims and Jews don’t eat pigs, Hindus don’t eat cows and most Americans don’t eat snake or whale. Jains, and vegetarians of all cultures, don’t eat any animals at all.

Westerners are particularly prone to turning up their nose at what other people eat. Their position is mostly illogical and sometimes offensive. They tend to mentally divide animals into those you eat (like pigs, sheep and chickens); those you cuddle or stroke (cats, dogs and horses); and those too ugly, unusual or intelligent to eat (say beetles, zebras and dolphins). Many profess to loathe barbarity – think clubbing seals – yet are happy to eat veal or to ignore what goes on in their friendly neighbourhood abattoir.

Michael Moore, the American documentary film-maker, brilliantly – if possibly inadvertently – exposed this self-delusion in Roger & Me. In a scene that was meant to highlight the poverty of Flint, Michigan, a woman selling rabbits is shown asking customers if they want “pets or meat”. If the answer is “pet”, the cuddly bunny is handed over to a delighted child. If “meat”, the hapless creature is clubbed to death with a lead pipe and skinned on the spot.

The richer societies get, the more finicky they tend to become. Many (including myself) waste half the animal they have had killed on their behalf, refusing to consume its organs, intestines, brain and so on. These parts are often eaten, and sometimes prized, in non-western societies, particularly in Asia. In their willingness to consume almost all the animal, both China and Japan score far better than most western countries.

Surely, then, one can’t object to eating shark fin? Yet one can and one should. The reasons are to do with conservation and our broader ecosystem. Some species of shark have been depleted by 70 per cent and a few, such as smooth hammerhead, bull sharks and tiger sharks, by 90 per cent or more. Sharks are the ocean’s top predators. Their absence causes havoc. Off the east coast of America, sharks used to eat bottom-feeding rays. With shark numbers massively depleted, the rays have had a field day devouring scallops, clams and oysters, rapidly reducing stocks.

Once shark fins are dried and in jars, it is all but impossible to tell what kind of shark they came from or whether they were finned. At one store in the Sheung Wan district of Hong Kong, a city where half the world’s shark fin is traded, a salesman admits he has no idea whether the fins come from endangered species. His shop does not sell shark meat, and he says it could be true that the carcase is simply tossed into the sea. As well as the cruelty, there is also the incredible waste. The average shark stretches to about 10 bowls of soup.

Certainly, shark fin is traditional. As one writer points out, to ask people to stop eating it is the equivalent of suggesting Americans give up turkey for Thanksgiving. There is doubtless a case for banning other types of food, such as some types of caviar and some species of whale. But cultures are not immutable. Traditions change, especially when they are unsustainable.

Fortunately, many of the most prominent campaigners against shark fin are Chinese, with Yao Ming, the recently retired basketball sensation, among the most passionate. In Hong Kong, where shark fin used to be de rigueur at Cantonese banquets, many young people refuse to eat it. Besides, sharks have less cachet now they are siphoned from the oceans on an industrial scale.

In Canada, more than a few ethnic Chinese couples have made a show of not serving shark fin at their wedding. Judy Lao recently told the Vancouver Province why she didn’t have it at her reception. “We don’t really care, our friends don’t care, and shark fin has no nutritional value anyway,” she said. “So why should we serve it?” Why indeed. 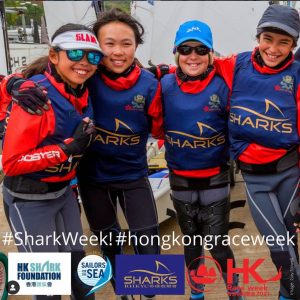