On 27 August, California bill AB376 passed the Senate Appropriations Committee, without amendments, and will now be put forward to the full Senate. If passed, the bill would make the possession, sale and trade of shark fin illegal throughout the state of California.

Given that California is the world’s biggest market for shark fin outside of Hong Kong and China, and is responsible for 85% of the shark fin consumed in the US, AB 376 has attracted no little attention.

Modeled on a bill that was passed in Hawaii last year and followed by similar bills later passed in the states of Washington and Oregon, AB 376 has courted a stream of controversy. Opponents have accused the bill of unfairly discriminating against Chinese culture, whilst supporters have fought back that the shark fin issue is one of environmental sustainability, and not cultural discrimination.

The debate has been covered in media across the globe, with Hong Kong’s own Financial Times also putting their view forward this week, in support of the bill. (cf http://hksharkfoundation.org/sharkfoundation2011/08/shark-in-my-soup-article-financial-times-25-aug-2011/)

Speaking of the bill, Bertha Lo, from the Hong Kong Shark Foundation (HKSF), said “If California joins the ranks of shark-fin-free states, it would send a massive signal to the shark fin industry. However, despite the current battle being won, the war is not over. AB 376 still needs to be passed, without amendment, by the full Senate and still has fierce opposition. If you haven’t already, please sign the APA Alliance (Asian Pacific American Ocean Harmony Alliance) Petition today.”

About HK Shark Foundation
HKSF is a Hong Kong based charity dedicated to raising awareness of the plight of sharks and to reducing consumption of shark products, primarily sharks fin soup.

Our message is one of sustainability. Healthy oceans need healthy shark populations to maintain the delicate balance of their marine ecosystems. Yet over one third of all shark species are already listed as threatened or near threatened with extinction1. This is due, in part, to over-fishing driven by an unsustainable demand for shark fin soup. As over half of the world’s shark fin is traded through Hong Kong, HKSF believes that the people of Hong Kong have the power to make a positive difference in this global issue.

Part of MYOCEAN Limited, a registered charity in Hong Kong, HKSF is also a member of the global shark conservation organisation Shark Alliance and works collaboratively with like-minded organisations both in Hong Kong and around the globe.

1 Convention on International Trade in Endangered Species of Wild Flora and Fauna (CITES), 2009 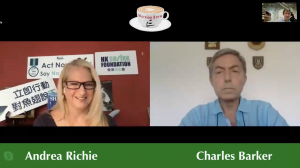 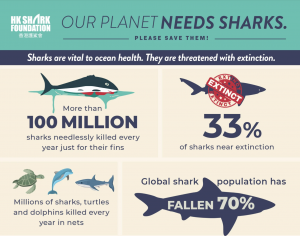