SharkSavers and LUSH Cosmetics have launched a new shark campaign in Hong Kong – the full text from their recent press release is below, or you can download it here.

LIVE “SHARK” TO BE HUNG ON HOOKS IN Hong Kong

Hong Kong – As the world’s shark populations teeter on the brink of extinction due to the global demand for shark fin soup and other shark products, Lush Fresh Handmade Cosmetics are launching a hard-hitting global campaign to protect these crucially important marine animals.

In a dramatic illustration of how sharks are caught on longlines to be killed for their fins, Lush employee and performance artist Alice Newstead will have her skin pierced with shark hooks and be suspended from scaffolding in a local arts and cultural center:

For the week-long campaign each of Lush’s 12 stores in Hong Kong and Macau will be pushing the pro-shark message by asking customers to sign postcards to the government of Hong Kong, demanding that shark fin soup and products be banned from the municipality.

Lush is supporting marine conservation organization Shark Savers who are urging the public to take personal action in the fight to save sharks by pledging not to eat shark fin soup. Lush has also created a new product especially for the campaign, Shark Fin Soap, which is a blue soap made with seaweed and sea salt with a cardboard shark fin sticking out the top. All proceeds from the limited edition soap will go to the support the programs of Shark Savers so they can continue their important work raising awareness for shark conservation.

Why is a cosmetics company concerned about sharks? A staggering 73 million sharks are killed every year. While shark fin soup is the primary cause for the slaughter, sharks are also killed for their flesh, cartilage (which is used for ‘healthcare’ supplements) and for their oil, which can be used in cosmetics. The escalating cost of shark fins has led to a dramatic increase in the number of sharks being killed, which means that 90% of the world’s shark population has already been wiped out; so the time for action to save sharks is now. Lush uses no shark products in the production of its cosmetics.

The campaign focal point will be at a June 14th press launch where a cast of international artists will gather to express the shark conservation message through photography, paintings, etchings and the suspension of Alice Newstead by shark hooks. The art exhibition will run at the JCCAC from June 14th to 19th, and will feature works from renowned International underwater photographers connected with Shark Savers. Original artwork from the Tokyo based organisation Pangeaseed and Ila France Porcher’s paintings will also be on display.

SAlly Siu, Lush Campaigns Manager said, “Lush are a campaigning company, and we have already tackled issues such as animal testing and environmental protection. But with 73 million sharks being killed every year and time fast running out for the remaining 10% of the global shark population, the campaign against shark finning and longlining is perhaps our biggest challenge yet.” Siu adds, “We want our staff and customers to help by avoiding all shark products and supporting Shark Savers vital work.”

Jonn Lu, Director of Shark Savers, Hong Kong said, “Shark Savers’ campaign features the voice of Hong Kong citizens who have rejected shark fin soup. Increasingly, people in our community are turning away from shark fin soup because it provides no real benefit to people, but has been devastating to sharks and the oceans. No culture has the right to trade ocean health for the enjoyment of a delicacy. Let’s all pledge to not eat shark fin soup.”

Lush Cosmetics, Since establishing 16 years ago, Lush Cosmetics has been driven by innovation and its ethics. Creators of pioneering beauty products such as the fizzing bath ballistic, shower jellies and solid shampoo bars. Lush places emphasis on fresh ingredients like organic fruits and vegetables. Lush operates a strict policy against animal testing and supports Fair Trade and Community Trade initiatives. Lush leads the cosmetics industry in combating over-packaging by running public awareness campaigns and developing products that can be sold ‘naked’ to the consumer without any packaging. Lush has been awarded the RSPCA Good Business Award for 2006 and 2007, the 2006 PETA Trailblazer Award for Animal Welfare and the International Fund for Animal Welfare ‘Business of the Year’ award for 2010. Co-founders Mark and Mo Constantine were awarded OBEs for services to the beauty industry in the new years honours list 2010. Lush currently has over 700 shops worldwide and are present in 46 countries, with manufacturing sites across the world.

Shark Savers is a non-profit organization that campaigns to curb demand for shark fin soup, create safe havens for sharks, and advocate on the behalf of sharks. Shark Savers leverages the power of the diving and conservation communities to save sharks so that they may continue their 400 million year contribution toward the healthy balance of ocean ecosystems.

PangeaSeed (pangeaseed.com) is a Tokyo-based non-profit organization dedicated to educating and raising international awareness on the plight of sharks and the destruction of their habitat. Through volunteer activism, research, and the various mediums of art, music, film, and photography, PangeaSeed aims to create an open dialogue with the global community to develop an understanding of the need to preserve and protect sharks and the oceans. PangeaSeed is the first organization in Japan to raise public awareness regarding shark conservation and preservation. Contributing artists for this exhibition: David Kinsey, Brad Klausen, Nao Harada, Natsuki Wakita, George Hayashi, Rhys Cooper, Kozyndan, Ben Wilson, Arik Roper, John Fellows and Silent Giants.

Up to 73 million sharks killed annually:

90 % of shark populations lost; Sharks are important to the ocean ecosystem: 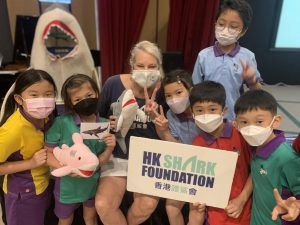