Conservationists, NGOs and thousands of individuals are now heating up Facebook in a massive shark conservation campaign requesting supporters to change their Facebook profile picture to that of a traditional paper cut with the Chinese New Year message asking people to celebrate Chinese New Year without shark fin soup.

The campaign, launched on 26 January 2011 in anticipation of the Chinese New Year, was initiated by shark conservation group Project: FIN and dive forum ScubaSG.com, both of which are based in Singapore. Within 4 days, word for the campaign spread to a global level, as organizations around the world unified and threw immediate support for the campaign. More than 20 organizations from Singapore, Malaysia, Hong Kong, Thailand, Africa, US, Australia& Europe have joined the campaign, turning the local campaign to an international movement for sharks.

The HK Shark Foundation (HKSF) showed their support for the Singaporean-originated campaign by posting it to their Facebook group of over 1,000 members, and even postponed their own planned CNY Facebook initiative which will now be launched in early March 2011. The new HKSF initiative will be a customised Facebook application to encourage viral support for the anti-shark-finning cause.

Unlike most species of fish, sharks take many years to become sexually mature and generally produce few young. This makes them particularly susceptible to over-fishing because the populations do not have time to recover. According to a 2010 study done by the International Union for Conservation of Nature (IUCN), the oldest trusted environmental organization that provides global conservation status of plants and animals, 17% of world’s 1,044 shark species are threatened with extinction. At present, human knowledge of about 47% of shark species is data deficient. Assuming half of these 47% are threatened, this would mean that more than one-third are threatened.

Traditionally a symbol of wealth, or respect for one’s guests at a special occasion, shark fin soup is becoming an increasingly controversial dish. Those who have eaten shark fins can vouch that the fins themselves are actually tasteless. It is the taste of all the other ingredients that, essentially, make the soup – with the fins just adding texture.

While we take pride in our Chinese tradition, perhaps the importance of cultural practices should not supersede the importance of maintaining sustainability. Being traditional does not make something right – as the cessation of the practice of footbinding illustrates.

About Project: FIN
Project: FIN is a Singapore-based marine conservation group that was established in January 2010. It is actively involved in spreading awareness about shark finning, and works closely with numerous NGOs around the globe.

Project: FIN is not a registered company and it does not solicit nor operate on neither funds nor donations.

About ScubaSG.com
ScubaSG.com, an online forum of Singapore-based diving enthusiasts, was set up in April 2010 and is currently the only scuba diving forum in Singapore. It has approximately over 2,000 active members and enjoys over 210,000 page views each month. 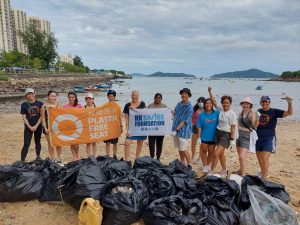 Parent of 7 year old student in Hong Kong after the student heard one of our HKSF shark conservation talks on zoom
“My daughter MeiMei just gave me a very interesting lecture about shark fin and shark oil. I knew about the…
Go to Top