‘Fin’ is just a Beginning

‘Fin’ traces the chain of events that leads from the finning of sharks in oceans around the world to the dinner tables of Asia, and is designed to educate consumers so they are able to make the more sustainable choice not to eat shark’s fin.

Film-maker Alex Hofford and photographer Paul Hilton spent three years amassing footage and photos from the beaches of Mozambique and the marketplaces of South Africa, Yemen and Dubai – as well as the shark fin shops of Sheung Wan in Hong Kong.

Their aim was to show the unsustainable way that sharks are being harvested to feed demand from chiefly Chinese consumers for a dish which appears on the menu at many special occasions, especially wedding banquets.

Documentary film-makers Josefina Bergsten, Andy Limond and Claire Garner, used this footage as the backbone of ‘Fin’, adding interviews with marine biologists, several shark fin dealers and a wedding planner, who talked of how couples can be led to consider not requesting the dish for their big day.

Attendees of the ‘I Shot Hong Kong’ festival voted for their favourite short film out of twelve finalists, each no more than 15 minutes long. For more details of the festival, go to www.ishothongkong.com.

The filmmakers plan to turn this short into a longer feature, and will also release stills shot on location in a book called ‘Man & Shark’ which will be available this year. 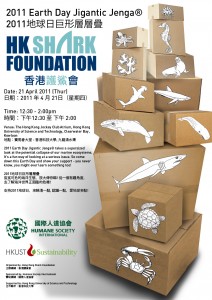